The Next morning, December 2, Lincoln was up early.  The weather had suddenly changed, as it still does in Kansas, and a bitterly cold north wind was blowing.  The only conveyance to be had for the eight-mile trip to Troy was an open buggy drawn by one horse.  Delahay and Wilder accompanied Lincoln who was “blue with cold” all the way.  Near Troy, Lincoln was met by Henry Villard, a correspondent for a New Your newspaper, who was returning from Colorado.  He knew Lincoln and was distressed as he saw how cold he looked.  He lent him a “buffalo” which Lincoln used on the remainder of the trip.

Lincoln’s speech at Troy lasted for an hour and three quarters and then turned into a debate as several slaveholders replied to him.  It is likely that Lincoln used again the speech he had given at Elwood.

Immediately after the Troy speech, Lincoln was driven the ten miles to Doniphan.  In Doniphan, Lincoln had luncheon and then gave his third speech which was probably a repetition of the one at Elwood.  He spoke in Ashel Low’s Hotel, one of the most imposing buildings in the town.

The next day, December 2, was bitterly cold. Lincoln was driven in a 1-horse open buggy across the prairie thirty miles to Troy.  Lincoln spoke that afternoon in Troy.  That night Lincoln spoke in Ashel Lowe’s hotel in Doniphan.

About thirty miles from St. Joseph an extraordinary incident occurred.  A buggy with two occupants was coming towards us over the open prairie.  As it approached, I thought I recognized one of them, and, sure enough, it turned out to be no less a person than Abraham Lincoln !  I stopped the wagon, called him by name, and jumped off to shake hands.  He did not recognize me with my full beard and pioneer’s costume. When I said, “Don’t you know me?” and gave my name, he look at me, most amazed, and then burst out laughing.  “Why , good gracious ! you look like a real Pike’s-Peaker.”  His surprise at this unexpected meeting was as great as mine.  He was on a lecturing tour through Kansas.  It was a cold morning, and the wind blew cuttingly from the northwest.  He was shivering in an open buggy, without even a roof over it, in a short overcoat, and without any covering for his legs.  I offered him one of my buffalo robes, which he gratefully accepted.  He undertook, of course, to return it to me, but I never saw it again.  After ten minutes’ chat, we separated.  The next time I saw him he was the Republican candidate for the Presidency.

The next day, December 2, the day on which John Brown was hanged, he spoke at Troy, and I think Colonel Ege replied to him, and fully vanquished the future president. He also spoke in Asahel Low’s hotel in Doniphan, and that completes the great man’s connections with this county.

Extracts from an address by the Honorable Daniel Webster Wilder, at Wathena, Kansas, July 4, 1884.

Supposedly, Lincoln went to the Smith Hotel and stagecoach stop to eat, where he asked for and ate several helpings of “Johnny cakes.”  He then walked across the street to the one-story courthouse to make his speech.

Late in the Autumn of 1859 he visited the Territory for the first and last time.  With Marcus J. Parrott, Delegate in Congress, A. Carter Wilder, afterward Representative, and Henry Villard, a Journalist, I went to Troy, in Doniphan County, to hear him.  In the imaginative language of the frontier, Troy was a “town” possibly a city.  But, save a shabby frame court-house, a tavern, and a few shanties, its urban glories were visible only to the eye of faith.  It was intensely cold.  The sweeping prairie wind rocked the crazy buildings, and cut the faces of travelers like a knife.  Mr. Wilder froze his hand during our ride, and Mr. Lincoln’ s party arrived wrapped in buffalo-robes.

Not more than forty people assembled in that little, bare-walled court-house.  There was none of the magnetism of a multitude to inspire the long, angular, ungainly orator, who rose up behind a rough table.  With little gesticulation, and that little ungraceful, he began, not to declaim, but to talk.  In a conversational tone, he argued the question of Slavery in the Territories, in the language of an average Ohio or New York farmer.  I thought, “If the Illinoisans consider this a great man, their ideas must be very peculiar.”

But in ten or fifteen minutes I was unconsciously and irresistibly drawn by the clearness and closeness of his argument.  Link after link it was forged and welded like a blacksmith’s chain.  He made few assertions, but merely asked questions:  “Is not this true? If you admit that fact, is not this induction correct?”  Give him his premises, and his conclusions were inevitable as death.

His fairness and candor were very noticeable.  He ridiculed nothing, burlesqued nothing, mis-represented nothing.  So far from distorting the views held by Mr. Douglas and his adherents, he stated them with more strength probably than any one of their advocates could have done.  Then, very modestly and courteously, he inquired into their soundness.  He was too kind for bitterness, and too great for vituperation.

His anecdotes, of course, were felicitous and illustrative.  He delineated the tortuous windings of the Democracy upon the Slavery question, from Thomas Jefferson down to Franklin Pierce.  Whenever he heard a man avow his determination to adhere unswervingly to the principles of the Democratic party, it reminded him, he said, of a “little incident” in Illinois.  A lad, plowing upon the prairie, asked his father in what direction he should strike a new furrow.  The parent replied, “Steer for that yoke of oxen standing at the further end of the field.”  The father went away, and the lad obeyed.  But just as he started, the oxen started also.  He kept steering for them ; and they continued to walk.  He followed them entirely around the field, and came “back to the starting-point, having furrowed a circle instead of a line !

The address lasted for an hour and three-quarters.  Neither rhetorical, graceful, nor eloquent, it was still very fascinating.  The people of the frontier believe profoundly in fair play, and in hearing both sides.  So they now called for an aged ex-Kentuckian, who was the heaviest slaveholder in the Territory.  Responding, he thus prefaced his remarks :

“I have heard, during my life, all the ablest public speakers – all the eminent statesmen of the past and the present generation.  And while I dissent utterly from the doctrines of this address, and shall endeavor to refute some of them, candor compels me to say that it is the most able and the most logical speech I ever listened to.”

December 1, warm day ; December 2, very cold ; he went to Troy ; spoke in the court-house ; speech replied to by Col. Andrew J. Ege [Agey], a native of Maryland.  At Troy he was met by A. D. Richardson, my brother [A. Carter Wilder], and John P. Hatterscheidt.

By HOWARD TURTLE, a Member of The Star’s Staff (, date unknown 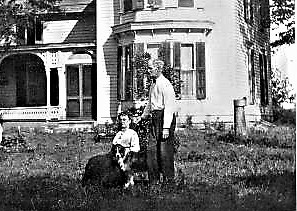 Aunt Julia Boyington and Husband Frank W. Boyington at their Home, Kennekuk, Kansas, sometime prior to 1926.